HomeFounding Fathers of the RCS

At the inaugural symposium of the RSC in September 1986, the special assistant to President John F. Kennedy Professor Arthur M. Schlesinger, Jr. observed, “This is the century that witnessed the emergence of the United States as a world power, and the three Roosevelts played crucial roles in the American journey from the wings to the center of the international stage.”

He predicted: “The Roosevelt Study Center will be the central European repository for the basic documents essential to the public history of the United States in the 20th century.” 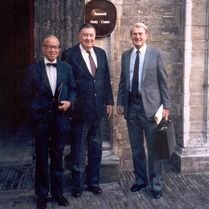