The origins of the RIAS go back to the remarkable importance of the year 1982 for Dutch-American relations. Firstly, it represented the 200th anniversary of formal diplomatic relations. American founding father and co-author of the Declaration of Independence, John Adams, had come to the Netherlands in 1780 as George Washington’s special envoy. Two years later, the Dutch government signed a treaty that cemented the relationship between the young American nation and the Netherlands, which became the second country in the world (after France) to recognize the United States. Secondly, 1982 marked the centenary of President Franklin D. Roosevelt’s birth. Although FDR never visited the Netherlands, it was his State of the Union speech to Congress on 6 January 1941 that laid out the Four Freedoms which have become such an integral part of his presidential legacy.

The location of the RIAS in the province of Zeeland comes from the available evidence that the US-based Roosevelt family originally came from the island of Tholen. Around 1650 Claes Maartensz van Rosevelt and his wife Jannetje made the crossing to New Amsterdam, buying a piece of land on Manhattan island. From these beginnings sprang the two wings of the family: the ‘Oyster Bay’ Roosevelts that included Theodore and Eleanor, and the ‘Hyde Park’ Roosevelts to which Franklin belonged.

To celebrate the anniversaries of 1982, and to recognize the Roosevelt family’s roots in Zeeland, the Province of Zeeland and the Franklin and Eleanor Roosevelt Institute (FERI) in Hyde Park organized the first international Four Freedoms Awards ceremony in Middelburg. The prize had originally been initiated by Eleanor Roosevelt herself in the late 1940s as a way to honor her late husband, and the US-based ceremony continues to this day in New York. The move to establish the international awards ceremony in Middelburg was regarded by all parties involved as a fitting way to recognize FDR’s family roots, the strength of Dutch-American relations, and the globalist vision of Roosevelt the President. The principal 1982 award was presented to Her Royal Highness Princess Juliana of the Netherlands. Since then they have been presented in Middelburg every two years, and notable laureates have included Václav Havel (1990), Mary Robinson (1998), Nelson Mandela (2002), the European Court of Human Rights (2010), and Angela Merkel (2016).

Out of this transatlantic partnership came an additional plan for establishing a permanent site for the study of the history, politics and culture of the United States, to work in close cooperation with universities in the Netherlands and beyond. In September 1986, located in the Abbey of Middelburg and under the leadership of Cornelis A. van Minnen, the Roosevelt Study Center opened its doors, supported by the Province of Zeeland, the Theodore Roosevelt Association, the Franklin and Eleanor Roosevelt Institute, and a host of corporate sponsors. “The establishment of the Roosevelt Study Center is not only a living tribute to three great Americans, but it is also a significant part of the bond, that connects European and American democracies,” wrote US president Ronald Reagan in a message delivered upon the occasion of the RSC’s official opening. An international symposium was organized that featured, among others, Pulitzer Prize-winners Arthur Schlesinger, Jr. and Theodore Roosevelt biographer Edmund Morris, as well as FDR’s youngest son, Franklin D. Roosevelt, Jr., and Ambassador William J. vanden Heuvel. Schlesinger observed: “This is the century that witnessed the emergence of the United States as a world power, and the three Roosevelts played crucial roles in the American journey from the wings to the center of the international stage.” Looking ahead, he stated that new Center “will be the central European repository for the basic documents essential to the public history of the United States.” 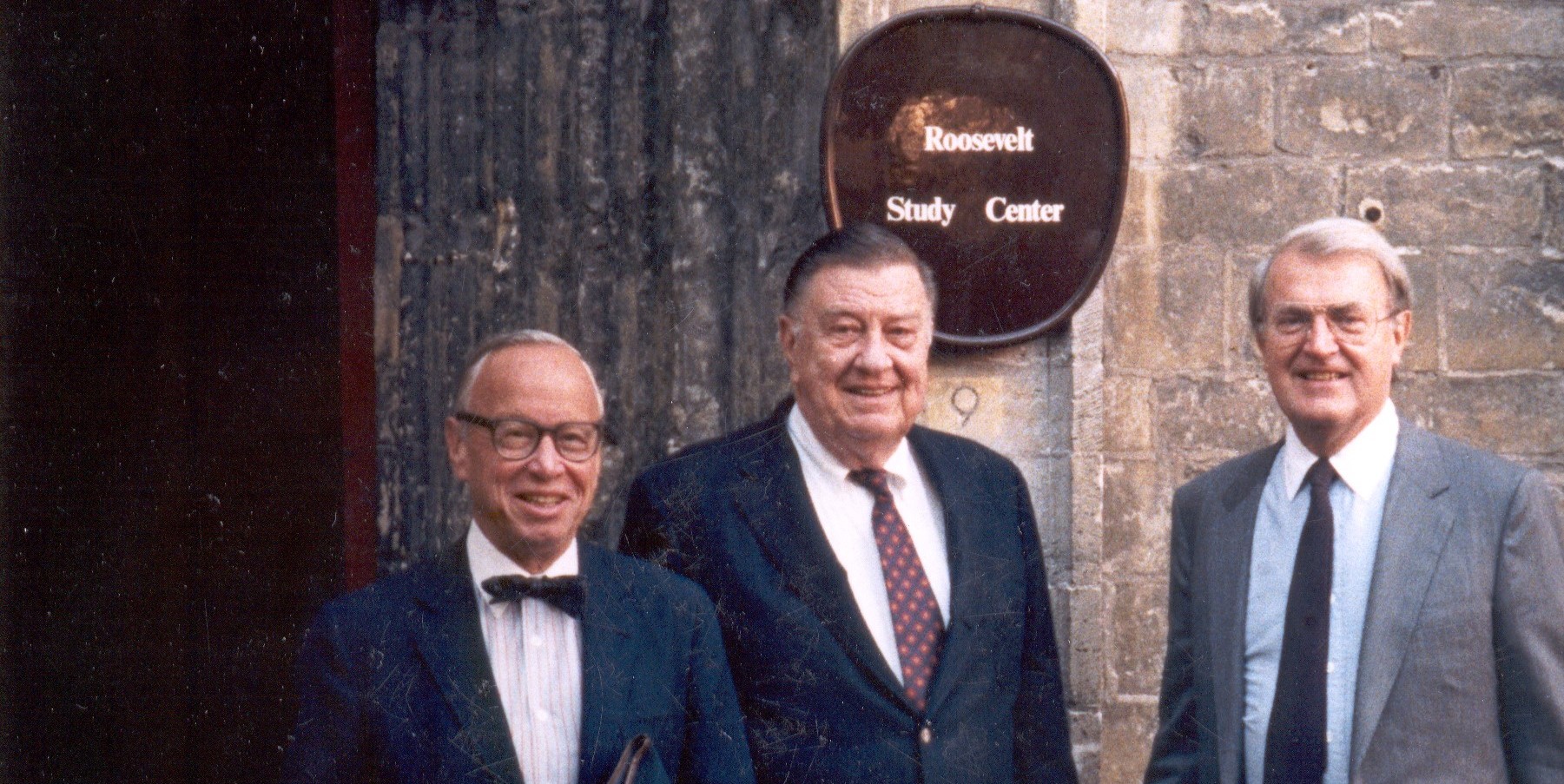 The first books came to the RSC library via the Franklin and Eleanor Roosevelt Institute, and the first collections of primary sources were donated by Harvard University: 58 microfiches and 485 microfilm reels containing the bulk of Theodore Roosevelt’s papers and covering different aspects of his early life and political career, his presidential years, and his numerous political campaigns. From these beginnings the Institute has built up a broad-based collection of archival materials on both domestic and foreign policy, with presidential papers providing the core. Particular attention has gone to assembling additional records on the Civil Rights movement and US public diplomacy.

Alongside its function as an archive, the Institute also became a site for major international conferences. In May 1990 Van Minnen organized ‘FDR as Seen by his European, American, and Asian Contemporaries’, involving leading historians from Britain, France, Italy, Germany, Spain, the Netherlands, the Soviet Union, China, Japan, and Latin America. One of the speakers was Dr. Valentin Berezhkov, Stalin and Molotov’s personal interpreter at the conferences of Teheran and Yalta. The conference resulted in the publication of the volume FDR and His Contemporaries: Foreign Perceptions of an American President  (New York: St. Martin’s Press, 1992), edited by Van Minnen himself.

A third role for the Institute was to act as a base for graduate studies in American history. Over the years many PhDs, either in dual-funded positions with Dutch universities or with Province of Zeeland grants, have been based at the Institute, and it has played a key role in the nurturing of American Studies at Dutch universities through providing teaching expertise, research resources, and student support at both BA and MA levels. Through the 1990s and 2000s the staff gradually expanded under Van Minnen’s leadership, with the addition of Leontien Joosse (office manager), Hans Krabbendam (deputy director), Giles Scott-Smith and Dario Fazzi (both joining as postdocs and becoming resident researchers). Contacts with other universities was strengthened by Van Minnen gaining a professorship in American History in Ghent, and Scott-Smith in Transatlantic Relations in Leiden. The Institute has also been the host institution for many MA students on internships, linking it closely with various study programs. Internationally, the Institute had close working relations with the Sorbonne, Heidelberg, and Cambridge, and has been a long-running partner with the University of Plymouth’s BA program in American History.

In 2009, to coincide with the general celebrations for four hundred years of contact between the Dutch and American peoples, the 1,200-page Four Centuries of Dutch-American Relations was published under the editorship of Van Minnen, Krabbendam, and Scott-Smith. At the book presentation held in the Abbey, Van Minnen presented the first copy to Her Royal Highness Princess Margriet of the Netherlands (godchild of Franklin D. Roosevelt) and to Scott Roosevelt, FDR’s great-grandson. Dutch poet laureate Ramsey Nasr read three sonnets he had especially written for the occasion. 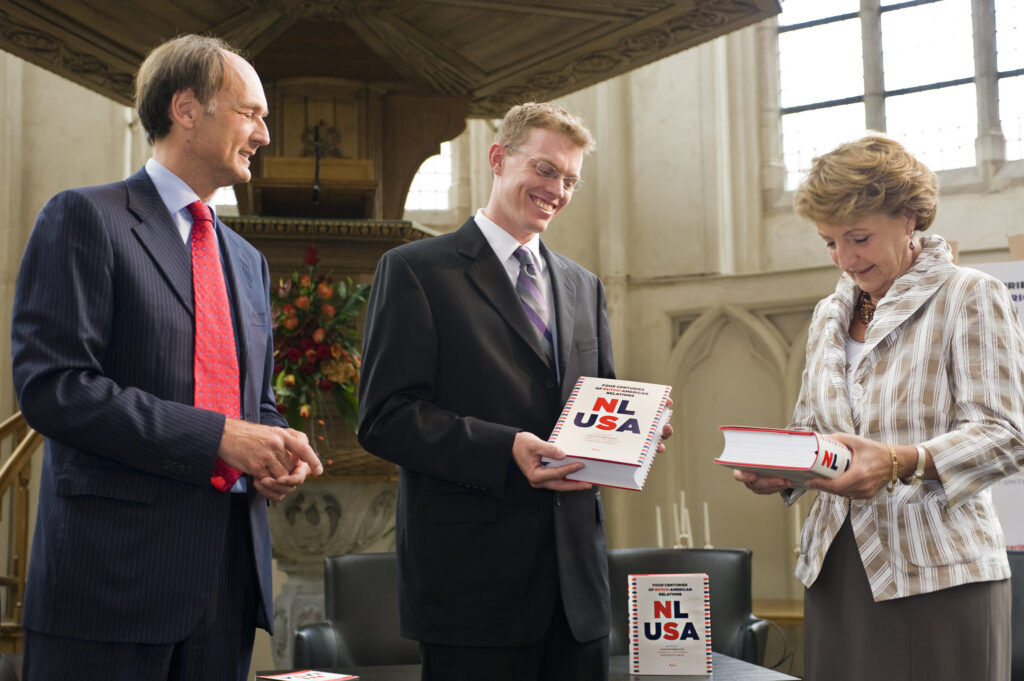 In 2016, thirty years after its founding, the Roosevelt Study Center entered into a new partnership together with the University of Leiden. This brought a new name – Roosevelt Institute for American Studies – and a new purpose – to become a graduate school for US history. This was begun under the heading ‘Exploring the Rooseveltian Century,’ a wide-ranging project that sought to investigate how the Roosevelts reconfigured our understanding of the role of the state, state-citizen relations, social equality, and individual and collective rights. This resulted in a major international conference and a separate project on educational innovation that led to the creation of a MOOC (online course), The Rooseveltian Century.

The Center and Institute have always been located in the historic center of Middelburg. From 1987 to 2020, it was housed at the twelfth-century Abbey complex. In August 2020, the Institute moved to its current location in the Zeeland Archives.