When I returned from a challenging year abroad, all I wanted to do was relax and do absolutely nothing else. However, I wanted to do this in Amsterdam and therefore I needed an income and a roof above my head.

Luckily, I found both. I began working in a kitchen of a café in Amsterdam and stayed in the room of an acquaintance while he went abroad for an internship. Thanks to a friend, I quickly found a job at the North-Holland Archive in Haarlem fort wo days in the week, promoting the educational website Geschiedenislokaal023.nl.

In my free time, I tried to finish writing an article about blackface in the Netherlands during the nineteenth century, helped the Fulbright Center digitizing their photo archive, translated texts for a professor, started a business, began taking piano lessons and joined a soccer team. So much for doing absolutely nothing. After four years of revising, my article about blackface was finally published in the Tijdschrift voor Geschiedenis.
Together with a journalist who wrote a short piece about my article, I began writing a book about the same topic. Well – I’m going to begin writing in June, when I have some free time. Because my academic adventures did not end here.

To realize this, I’m organizing a Historisch Café in an archive in every province. An evening (orafternoon) filled with short lectures about a historical topic, music and a beer. Young historians will take the floor and talk about a subject based on a local beer sponsored by local breweries. Thanks to our sponsors, we do not have to ask an entrance fee, making the events even more accessible. 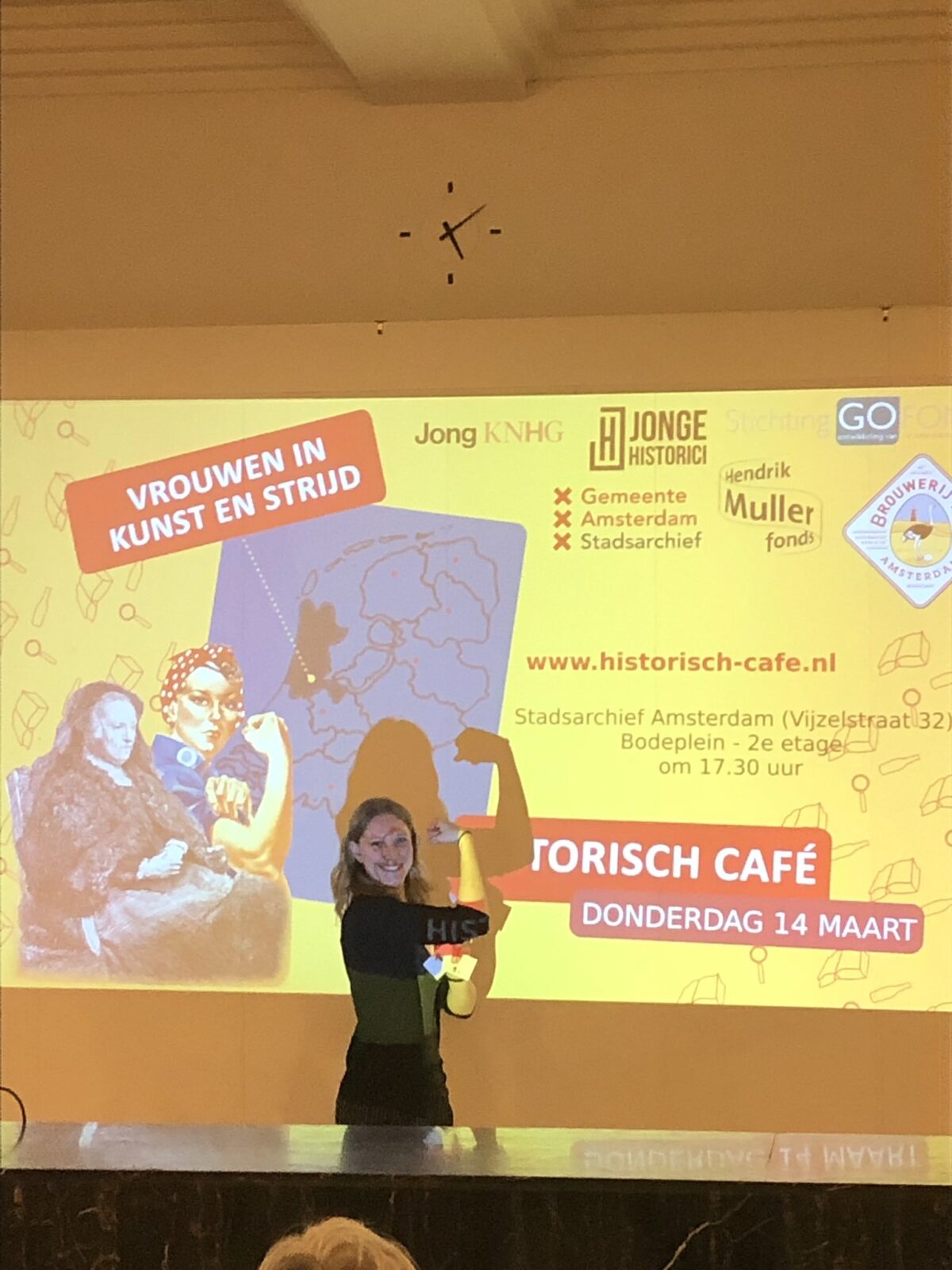 The Roosevelt Study Center has been an ongoing source of support in my quest for a way to continue conducting research in my field of interest after  graduating. Its friendly staff, beautiful location and access to great sources made me feel at home after a truly life-turning study period at Emory University.

As an American Studies Diploma Program student at Smith College (Northampton, MA), I am allowed to take almost every course I am interested in. Due to sudden health issues during the first semester, I decided to take one course with a somewhat familiar subject (‘American Popular Culture’)  and one with a more challenging interdisciplinary subject (‘Computers, the Internet and American Culture’). The brilliant professor that taught both courses is now my project advisor. The subject of my project is Black Pete and racial representation. Drawing from my Master thesis, I am currently exploring the ways in which Dutch newspapers portrayed Black Pete during the nineteenth and twentieth century. That is to say, when discussing Black Pete, did the newspapers take his ‘race’ into account? Was Black Pete simply white, blackened by the soot of the chimney? If not, when did Dutch newspapers began to become ‘colorblind’ when it comes to Black Pete’s race? Needless to say, this project is more complicated than these simple questions. Moreover, this project is not limited to Dutch culture: although Black Pete is a Dutch topic, the racial portrayal of this character is derived from a global representation of blackness.

Since I didn’t think that I challenged myself during the first semester, I asked another professor at Smith College if I could take a so-called ‘Special Studies’ course. This simply means that we design our own course. Although the professor was on a sabbatical, he was happy to be my advisor for my second project: ‘Lynching in the United States.’ In February, an underappreciated non-prot organization in Alabama published a report about lynching in the United States. The Equal Justice Initiative argues that many more African-Americans have been lynched during the ‘era of terror’ than one initially thought. This report gave me a reason to dive into the culture of lynching. Why were Americans not able to pass a law against lynching? Although the stories and postcards are nauseating, I am really glad I found a professor willing to advise me on this topic.

Finally, as a Netherland-America Foundation (NAF) fellow, I have the opportunity to attend a lot of events with interesting guests. I already visited New York City twice: in November, I was a guest at the Stuyvesant Ball in the Plaza Hotel, and in March, I was able to meet some NAF alumni at the annual NAF Alumni Connection Event. In addition, as a Fulbright grantee, I will attend an Enrichment Seminar in Washington DC in April. It is interesting to me that whenever I briefly discuss my research, and without taking a stance in the Black Pete debate, my field of interest often provokes defensive reactions – even among academics. These reactions motivate me to continue exploring this topic. Indeed, talking about my topic during these events made me realize that there are always some people secretly interested in the history and continuation of the Black Pete tradition. If you are one of the people secretly interested in the history of Black Pete, or simply want to read more about my research and experience abroad, you are more than welcome to read my blog;
http://www.liseinamerika.blogspot.nl/.

During my stay in the wonderful South of the United States, the foundations of my beliefs and opinions were brutally overruled. Uncritically, I had made certain traditions and social rules my own; traditions that reveal the Dutch effort, or lack thereof, to come to terms with past racial injustices, and misplaced social expectations women and men alike are trying to uphold. For my own sake, I decided to devote my master thesis to a form of entertainment, specically a tradition I could not yet fully grasp or understand: American blackface minstrelsy in the Netherlands. This subject eventually led me to the history of the Dutch colonies and Uncle Tom’s Cabin. The joy of conducting this research and the hard work I had put into writing my thesis did not go unnoticed, as my thesis supervisor nominated my thesis for the Theodore Roosevelt American History Award – a nomination that would lead me back to Middelburg. Unexpectedly, I won the second prize!

As for many students, graduating from the university was hard. Taking classes and conducting research was something I enjoyed and had become fairly good at. However, it was not necessarily something I wanted to do for the rest of my life. What do I want? At the start of my master’s in American Studies, I noticed a Call for Applications for the American Studies Diploma Program at Smith College. The American Studies Diploma Program is a one-year program for international students. Smith College describes it as a ‘unique, competitive, interdisciplinary program [that] includes a year of intensive coursework and research in the study of American society and culture, leading to a certicate in American studies.’ I considered sending in my application until the truth hit me. First of all, I was just starting a master’s degree. Secondly, I did not have money left after spending my savings on an exchange to Emory University during my bachelors. ‘I should not push my luck,’ I thought, and Smith College faded away to the back of my mind.

While feeling slightly let down by the few opportunities life after college had to offer, I received an email from a professor to inform me about the Call for Applications for Smith College. I decided to take my chances and apply for the Program. After I was selected to represent the University of Amsterdam at Smith College, I felt anxious: Where will I get the required money from? What if I miss opportunities in the Netherlands while I am abroad? Is Smith College worth it? After a long internal debate, my answer to the last question was ‘Yes’ and the rest of my worries became obsolete. A day later, I received an email from the VSBfonds informing me that they had approved my grant proposal. A week later, the Fulbright Center called me to congratulate me with becoming a Fulbright grantee. At the very least, the financial support gives me an additional boost to continue conducting research in my field of interest within American Studies.

As a result, from August 20 onwards, I will be studying at Smith College in Northampton, Massachusetts. I cannot wait to expand my knowledge of (African-)American history and culture, explore the broad array of Women and Gender Studies courses Smith has to offer, and dive into courses analyzing concepts such as ‘double-consciousness’ – a term that is still applicable today. This concept, as explained by W.E.B. DuBois, has never left my mind: ‘It is a peculiar sensation, this double-consciousness, this sense of always looking at one’s self through the eyes of others, of measuring one’s soul by the tape of a world that looks on in amused contempt and pity.’